teleSUR Exclusive: As the Thomas Fire continues into its third week, we spoke to community organizers on the ground who are serving immigrant and working-poor communities in Oxnard, Santa Paula and Ventura. 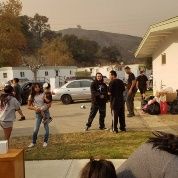 While calming winds have stalled California's massive Thomas Fire – which now ranks as the second-largest in the state's modern history – the sprawling Central Coast firestorm north of Los Angeles will leave a powerful imprint on the day-to-day lives of the people in the region.

"It seems that only when an entire people are in crisis, do we find a way to put our selfishness aside, to coordinate, organize, and make things happen.”

Having burned over 270,000 acres over the course of two weeks, the firestorm affected hundreds of thousands of residents in the coastal counties of Ventura and Santa Barbara, resulting in massive blackouts and the destruction of over 1,000 buildings. Over the weekend, about 8,500 firefighting personnel were assigned to fight the fire – the largest such force ever assembled for fire suppression in California. While flagging winds have allowed firefighters to finally gain the initiative, experts don't expect the fire to be completely put out until after the New Year.

"This time climate, ecology, and stupid urbanization have conspired to create the ingredients for one of the most perfect firestorms in history. Experts have seen it coming for months ... This is a specter against which grand inquisitors and wars against terrorism are powerless to protect us," radical urban theorist Mike Davis wrote in 2003 about a similarly massive fire in San Diego.

While newspaper headlines across the country have largely focused on grim reports of property damage and epic scenes of hillside villas and homes engulfed in flames, homeowners and ranch operators weren't the only ones whose lives were profoundly disrupted by the massive blaze.

Indeed, the spread of deadly wildfire pollutants has forced people as distant as Los Angeles County's San Fernando Valley to report nosebleeds and breathing difficulties due to smoke inhalation.

Agricultural workers, working-class families and ranch-hands – many of whom are Mexican immigrants – were among those who were thrust into the swelling ranks of California's homeless population.

"Like, all of a sudden we went from being the lazy, sleepy 805... to Aleppo," longtime Ventura local and community organizer Miguel Rodriguez told teleSUR. "Without the casualties, of course."

Working-poor families whose homes and apartments weren't consumed by the fire have also been forced to “make the difficult decision of putting bread on the table or protecting their families' health,” Rodriguez explained.

Rodriguez is among the dozens of local residents who have selflessly committed the past two weeks toward improving living conditions for those whose lives were upended by the fire.

From the start, the Ventura County Fairgrounds – which was transformed into an evacuation center – was inundated by donations of food, clothing and cots, as well as N95 facepiece masks that protect wearers from the deadly byproducts of the fire.

However, working-poor families were forced to dip into their meager savings or sharply cut back on Christmas expenditures due to the hazards presented by the fire, Rodriguez explained.

“These families have had to incur extra expenses for masks, water as well as food because some communities went without power for up to a week or were evacuated,” Rodriguez explained.

“Many families had nowhere else to go and didn't want to lose the little that they have, so they stayed indoors without air purifiers, masks or even their basic utilities ... Inhaling contaminated air in the darkness, forgotten by public officials.”

Farmworkers who lost their trailers or work equipment in the fire were also forced to make the hard choice of mitigating their smoke-related headaches with air purifiers, or simply replacing their work equipment such as boots and blades, Rodriguez added. Meanwhile, their children can still be seen climbing on monkey bars and melted plastic playgrounds that were warped or partially destroyed by the fire.

Ventura County's agricultural workforce is, for too many locals, an invisible population. For middle-class white motorists commuting along the 101 Freeway through the majority-Latino city of Oxnard south of Ventura, the hunched-over farmworkers toiling in vast strawberry fields are simply a part of the local scenery.

The Thomas Fire had left Oxnard largely unscathed, but the city remained directly in the path of Santa Ana winds that caused the heavy smoke to waft into the city of 200,000, causing school districts to cancel classes for the entire month of December.

"We felt safe from the fires at first, but quickly realized the threat Oxnard would face, and how unprepared we all were," said Oxnard resident Matt Urango, a member of grassroots community organization Todo Poder al Pueblo Collective.

However, when photos shot by the Oxnard Community College Dreamers Club depicting farm workers continuing to toil against a backdrop of the sooty sky went viral, the reality had set in that workers were dangerously exposed to hazardous conditions far beyond the usual toxic cocktail of pesticides and freeway-traffic pollution.

The pickers kept picking, regardless.

“Instead of sacrificing a few day's profit, capitalism sacrifices the health of the workers,” the Todo Poder al Pueblo Collective said in a Facebook post of the photo. “Even as the fire rages, the most marginalized are expected to bear the environmental impact without complaint.”

In many cases, farms continued to operate despite warnings from the Ventura County Farm Bureau, the Ventura County Agricultural Association, and the California Strawberry Commission, according to the Santa Barbara Independent. Cal/OSHA – the state Division of Occupational Safety and Health – even warned employers to protect their workers, but failed to back up the warning with staffed regulatory or enforcement personnel.

“Smoke from wildfires contains chemicals, gases and fine particles that can harm health,” the Cal/OSHA statement said. “The greatest hazard comes from breathing fine particles, which can reduce lung function, worsen asthma and other existing heart and lung conditions, and cause coughing, wheezing and difficulty breathing.”

In 2013, however, strawberry workers who attempted to walk off the fields due to a similar raging wildfire – the Camarillo Springs Fire – were fired for walking from their worksite.

While evacuation centers for the displaced were getting more donations than they could possibly handle, thousands of working people and youth across the barrios of Oxnard were being neglected – a common story in a city where commerce and public image are given far more attention than local residents.

"It took a crisis like this for the most marginalized of people to be recognized by the public,” Urango said. “As farmworkers continued their work in the fields, the populace looked on with surprise and disbelief at the conditions they were subject to.”

Eventually, local groups like the grassroots Todo Poder al Pueblo Collective, concerned groups of self-organized volunteers, and paid staffers from nonprofit groups began receiving thousands of donated N95 masks from the charity NGO, Direct Relief. It was now up to these groups to begin moving the donations to the affected populations that needed aid the most.

“Organizations, volunteers, individuals took to action and began allocating resources – specifically N95 masks. It was quick and direct. The pressure was put on the bosses and while some buckled, others made excuses,” Urango continued.

While some of the field managers at job sites ignored the volunteers, some were less friendly and attempted to eject the volunteers from their properties, perhaps fearing “outside agitators.” But the farmworkers alone weren't the only ones in need.

RELATED:
6 Latinos Killed by US Cops This Week—and Media Ignored It

"Mask distribution was at first focused mainly on those who work outside. But there was also a demand for masks from the general public including child care providers, parents, and others,” Urango said.

“This prompted us to begin distributing elsewhere. We saw school children leaving the grounds in droves, coughing with their shirts over their mouths. They were relieved when we were able to provide them with what their school and the city wasn't providing."

Rodriguez agreed that beyond the efforts of thousands of first-responders, the disaster response by authorities was chaotic and scattershot.

“Shit's so wack, the community were the ones who gave masks to school administrators,” he said. “The communication isn't reaching the raza for this kind of stuff.”

Urango remains convinced that the events of the past two weeks underscore the need for working people to have a plan in place to react to mass emergencies and calamities – especially in a flood, fire, and earthquake-prone region like the Central Coast.

"It seems that only when an entire people are in crisis, do we find a way to put our selfishness aside, to coordinate, organize, and make things happen,” Urango said.

“Hopefully, we can continue to look out for those who are struggling, even in times of 'normalcy,' as the threat of poverty, violence, unemployment, and displacement is constant for our communities.”