Antigua and Barbuda citizens are gearing up to go to the polls on March 21 after Prime Minister Gaston Browne announced last month that parliamentary elections "will be held in a matter of weeks." 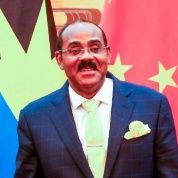 RELATED:
Antigua Elections to be Held 'Within Weeks'

Key issues being debated on the campaign trail are the rebuilding of homes and infrastructure following last year's hurricanes Irma and Maria; ensuring better use of land; advancing the use of technology, and attending to the social needs of the population.

Having witnessed the recent parliamentary election in Grenada, in which Prime Minister Dr. Keith Mitchell and his party scored a sweeping victory, Browne – a supporter of Venezuela's Bolivarian Revolutionary government – has promised similar results.

"I am quite sure the results here in Antigua and Barbuda will be just as exciting; as we say 17 none," Browne said, extending "congratulations to my dear friend and brother," Mitchell.

Political analyst Arvel Grant predicts that Browne and the Antigua and Barbuda Labour Party will score a "second term" in office.

Harold Lovell, the leader of the main opposition the United Progressive Party (UPP), said he's "feeling the pulse" of the people and is ready to unseat Browne.

Campaigning under the slogan 'Delivering HOPE, UPP,' Lovell said: "Antiguans and Barbudans, your lives and your livelihood and this country's future are in your hands. On the left there is hopelessness. On the right, there is hope, happiness, opportunity, prosperity, and empowerment."

Lovell accused Browne's Labour Party of offering voters cash incentives to relinquish their voter identification cards until after the election, according to the Jamaica Observer.

This "illegal practice of paying electors to give up their voter identification card is intended to ensure that these persons would be unable to vote in the upcoming election," the party said in a statement.

Leon Chaku Symister, a UPP legal advisor, described the act as "blatant bribery" and said the party was "surprised" by such "a corrupt practice under our election law."

It's his party's "intention to take further steps to have law enforcement monitor these violators, with a view to bring them to justice," Symister told Nation News.

An unforeseen election issue is a new law intended to sell land to private tourism investors to help rebuild Barbuda after Hurricane Irma. However, voters have threatened to take the government to court to preserve the centuries-old practice of communal land ownership by local residents.

"The prime minister knows if he gets re-elected he can do what he wants without elections hanging over his head in a year's time," said Trevor Walker, a leader of the Barbuda People's Movement who's challenging the new land ownership scheme.

A year after Britain paid the modern equivalent of US$335 billion in compensation to slaveowners as part of the Slavery Abolition Act in 1833, the practise was abolished in Antigua and Barbuda, and other British colonies in the Americas. Since then, communal right to land has been the norm for Barbuda. In 2007, the practice was made official, affording collective land ownership to all Barbudans.

RELATED:
Britain's Loan to Pay Off Slave Owners 'Not Repaid Until 2015'

The incumbent prime minister, however, has contested public land rights, calling them a "myth": "You will never see anything in the constitution of Antigua and Barbuda speaking to any ownership of any land in common. It does not exist in the constitution, so you cannot pass a law that supersedes the constitution."

Meanwhile, attorney Charlesworth Tabor told the Antigua Observer that "there is nothing preventing" the people of Barbuda from voting on their island: "It is not an electronic election where you need internet access and you need electricity. It is a manual exercise."