"The smart way to keep people passive and obedient is to strictly limit the spectrum of acceptable opinion, but allow very lively debate within that spectrum." – Noam Chomsky 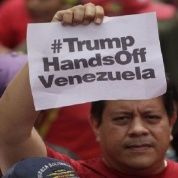 Humanitarian crisis, starvation, migration, repressive government, economic crisis, sanctions, resistance, Communist Party, Chavez, hyperinflation, crackdown on corruption, election fraud: just some of the keywords used by the Wall Street Journal, the Financial Times, Reuters and the Miami Herald to describe Venezuela as it heads to the polls on May 20 to select its next president.

While some of these words might give a glimpse into the current situation in Venezuela, Western media's hyper-sensationalism of the nation's domestic affairs falls far short of addressing the realities on the ground.

On a recent episode of Last Week Tonight, host John Oliver – a British comedian – attempted to shed light on the ongoing crisis by weaving some random anecdotes into a 20-minute segment. He outrightly dismissed crucial facts about Venezuela and its socialist history, coming perilously close to publicly endorsing the U.S. sanctions intended to prolong the crisis.

Critics, however, took note. Gabriel Hetland is a professor at the University of Albany who writes extensively about Venezuela. Writing in The Nation, she said: "The U.S. government has not only cheered and funded these anti-democratic actions. By absurdly declaring that Venezuela is an 'unusual and extraordinary threat' to U.S. national security, and pressuring investors and bankers to steer clear of the Maduro administration, the White House has prevented Venezuela from obtaining much-needed foreign financing and investment."

One of the main failings of the Western media is the refusal to acknowledge the history of the issues currently playing out in Venezuela.

In 2006, after Hugo Chavez was elected Venezuela's president for a second term, Nicolas Maduro – who would later become president – was named foreign affairs minister. Under Chavez, Maduro made strategic alliances with neighboring countries, forging and strengthening regional alliances with progressive governments in Brazil, Bolivia, Nicaragua, Cuba, Ecuador, Argentina and Uruguay, as well as with the Caribbean Community (Caricom).

Venezuela's foreign policy is notable for its multipolar vision: a geopolitical perspective unconfined to the binary, Cold War powers represented by the United States and Russia. It was Maduro who revitalized the Organization of Petroleum Exporting Countries (OPEC) and established Petrocaribe as part of Venezuela's cooperation with other Caribbean nations.

Despite attempts by the Western power axis – the United States, Switzerland, Canada and the European Union – to overthrow Maduro's government, the president has sought to consolidate support with member states of the Non-Aligned Movement, including South Africa, Dominica, Iran and Cuba.

Maduro has made repeated calls to the mainstream media for fair, unbiased and accurate coverage, but to little avail. In April 2017, then Foreign Minister Delcy Rodriguez said Venezuela was being exposed to a "very aggressive global media campaign" and called for "responsible management of information."

Words are powerful: they suggest, and help shape public opinion. Used the wrong way, they can prove extremely damaging. For instance, while Chavez was in power, Western media frequently described him as a 'quasi-dictator' and 'strongman.'

Jonathan Cook is a senior policy officer with the World Wildlife Fund. He says: "Columnists like the Washington Post's Jackson Diehl and the Miami Herald's Andres Oppenheimer have wielded the sharpest hatchets. Diehl, for instance, labeled pro-Chavez social movements 'anti-democratic' while lauding the anti-Chavez opposition, which used such tactics as distributing false exit poll results during the 2004 referendum.

"Washington's hostility toward the recent changes echoes a wave of earlier suspicion of the likes of Cuba's Castro, Nicaragua's Ortega and Chile's Allende. It also reflects unease at declining U.S. influence in the region.

"The Post's Diehl gripes about Venezuela 'buying the support of' other Latin American governments with subsidized oil, and an April 4 article in the New York Times prods Chavez for 'spending billions of dollars of his country's oil windfall on pet projects abroad.' Nothing is said about Uncle Sam's own long history of handing out carrots and wielding sticks in the region."

Now, words such as 'dictator,' 'extreme' and 'radical' are being deployed by Western media to describe Maduro and other left-wing governments in the region for one reason alone: to stoke fear.

The most recent protests in Venezuela started in 2016, when the opposition-led National Assembly attempted to impeach Maduro before calling for a referendum.

Maduro's government has made frequent calls for dialogue with the opposition, which the opposition has repeatedly turned down. In 2016, the opposition-led National Assembly tried to impeach Maduro illegally – they had zero support from legislative bodies.

Then, in October of 2016, the opposition called for a coup against Maduro when the Supreme Court ruled to suspend the presidential recall referendum due to suspected electoral fraud in the first phase of the process. The opposition then launched a series of anti-government protests, further exacerbating the crisis.

Mike Prysner, a documentary filmmaker with teleSUR who reports from the ground in Caracas, told Renegade Inc about the protests: "What happens is that the 'guarimbas' (armed opposition groups) follow the peaceful protests and when they come near police, they insert themselves in between the two.

"They then push and push and push until there's a reaction – and they have cameras and journalists on hand to record the reaction, so it looks like the police are being aggressive.

"We were once filming a protest and a group of guarimbas challenged us. If we'd said we were with teleSUR, at the very least they would have beaten us and taken our equipment, but we told them we were American freelance journalists. They need Americans to film them and publicise them, so we were accepted."

According to the Miami Herald, the funds will help finance a year-long project to "draw more international attention to the crisis, show the public what Venezuela could look like under new leadership, and provide the opposition and other stakeholders the tools needed to work more cohesively together."

Jason Marczak, director of the Atlantic Council's Adrienne Arsht Latin America Center, told the Miami Herald: "What we're trying to do is address the fractures within the opposition. That is then helpful for the opposition's overall stance because what the government wants is a divided opposition."

But according to Alternet journalist Max Blumenthal, the Atlantic Council is "a pro-regime-change think tank that is funded by Western governments and their allies." It's also financed in part by "Viktor Pinchuk, Ukrainian nationalist and longtime friend/donor of the Clintons."

According to Venezuelanalysis.com, this same council has pushed for "arming Salafist militant groups against the Bashar Al-Assad regime in Syria and lobbied for more militaristic policies toward Russia. In Venezuela, the organization is intimately linked to the pro-United States opposition."

For instance, in February this year, the Wall Street Journal published a story headlined 'Venezuela's Misery Fuels Migration on Epic Scale.' The story quotes Tomas Paez, described as an immigration expert at Venezuela's Central University, as saying: "Nearly 3 million Venezuelans – a tenth of the population – have left the oil-rich country over the past two decades of leftist rule. Almost half that number – some 1.2 million people – have gone in the past two years."

Venezuelanalysis.com notes that in 2002 Paez signed his name to a quarter-page ad in the Venezuelan newspaper El Nacional, welcoming Pedro Carmona – then head of Venezuela's largest business federation – as the country's new president after a U.S.-backed military coup briefly ousted Chavez.

Moreover, the figures supporting Paez's argument in the Wall Street Journal simply don't add up. Joe Emersberger breaks them down in the Green Left Weekly: "According to a Colombian university study of Venezuelan migration to Colombia, it averaged about 47,000 per year from 2011–2014, then increased to 80,000 per year in 2015–16.

"U.S. government data show migration from Venezuela to the United States increasing from about 7,000 per year before 2013 to 28,000 per year by 2015, including Venezuelans who have entered without authorization.

"Between 2000 to 2013, the United States was the destination for about 30 percent of Venezuelan-born people who left to live abroad, according to the World Bank figures.

"If the Colombian university study and U.S. government data are accurate, then the United States has been the destination for about 20 percent of Venezuelan migrants after 2013. That would mean about 140,000 Venezuelans per year were leaving to live abroad by 2016.

"That is not remotely comparable to the 5 million Syrians who fled the country in the first five years following the civil war – and that doesn't include over a million per year who fled their homes inside Syria (the internally displaced)."

Western media continue to dismiss the May 20 elections as a farce, despite the fact they will be overseen by international experts and organizations – including the African Union, the Caribbean Community and the Latin American Council on Electoral Experts (CEELA) – and involve one of the most technologically sophisticated voting systems in the world.

With just days to go until Venezuela chooses its next president, luminaries across the continent are rightly petitioning to fight such media bias and calling instead for "balanced information that allows us to understand the complexity of the situation in Venezuela."