13 May 2018 - 07:35 AM
Analysis
Abandoning Peace, Faction of Venezuelan Opposition Boycotts Elections in Favor of Intervention
0

As Venezuelans prepare to go to polls on May 20 to elect a president and local legislative councils, some factions of the opposition have rejected participating despite several rounds of dialogue over the past few years with the latest one resulting in an agreement signed and ratified by the socialist government, however, rejected at the last minute by the now-sidelined opposition block MUD after alleged pressure by the United States and its regional right-wing allies. 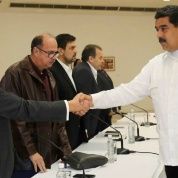 A look at the latest agreement and past rounds of talks reveals a familiar yet dangerous trend by the Venezuelan right-wing opposition, which appears to be more invested in regime change through foreign intervention and military coups, instead of peaceful coexistence that would ultimately serve the Venezuelan people.

In early February, the Venezuelan government signed the Democratic Coexistence Agreement to move the country’s political conflict from the arena of violence to that of political contest. However, the opposition rejected the agreement and has called for a boycott of the May 20 elections closing the door for any peaceful resolution.

Democratic coexistence between the right-wing opposition and the socialist governments of Hugo Chavez and Nicolas Maduro has remained elusive since the short-lived coup against Chavez in 2002 because sectors of the opposition remain unwilling to relinquish anti-democratic strategies.

During Maduro’s tenure he has urged the opposition to engage in political dialogue as an alternative to street violence.

First, after protests in 2014 resulted in 40 deaths and 400 wounded, including Chavistas, opposition members, and state security officials. The high-level meeting that followed failed to reach a solution to the political crisis.

The last rounds of failed talks were also preceded by a wave of political violence and attempts to oust Maduro.

In 2016 the opposition-led National Assembly tried to impeach Maduro without the constitutionally-mandated support of the Venezuelan Supreme Court and the Republican Moral Council and declared itself in open “rebellion” against executive and judicial powers.

Later they called for a referendum to oust Maduro, but the National Electoral Council (CNE) cancelled the process after high courts of five Venezuelan states annulled the first stage of the signature collection process due to fraudulent signatures.

In response, the opposition began a cycle of violent protests between April and July 2017 that led to 125 deaths.

To resolve the institutional crisis and put an end to the deadly protests, President Maduro called for a new vote to elect representatives to a National Constituent Assembly (ANC).

After winning the elections and despite the attacks Maduro called for a new round of dialogue, which officially began in December 2017.

Leaders of the Democratic Unity Roundtable (MUD) said they would participate to seek an "electoral solution." They wanted what they had demanded several times before: early presidential elections to beat Maduro.

Aside from preventing political violence, the government sought to reach an agreement with the opposition to end United States-sponsored economic sanctions and regain access to investments and foreign loans.

The agreement included a clause creating a bilateral commission to act internationally in efforts to end the unilateral sanctions, and establishing mutual recognition between the opposition-controlled National Assembly, which has been held in contempt due to electoral fraud, and the ANC.

To address the opposition’s demand for an “electoral solution,” the agreement moved up the elections by seven months, from December to April and layed out a series of electoral guarantees.

Among them the election of two CNE members agreed upon by “the signatories of this agreement,” a proposal to the United Nations Secretary General to send an electoral observers delegation, technical audits with established standards “no lower than those implemented in the elections of… Dec. 6, 2015,” and a Monitoring and Verification Commission integrated by a government representative, an opposition representative and former Spanish Prime Minister Jose Luis Rodriguez Zapatero.

On Feb. 7, the same day when former U.S. Secretary of State Rex Tillerson ended his Latin American tour, opposition legislator Julio Borges announced they would not sign the final agreement.

During his visit in Argentina, on Feb. 3, Tillerson announced an oil embargo. On Feb. 6, when Colombia was hosting Tillerson, President Juan Manuel Santos said it would be "impossible" to recognize the results of the upcoming Venezuelan election.

A day later, the Venezuelan opposition backed out of the agreement and refused to participate in the early elections they had called for.

The opposition cried fraud arguing some political parties and politicians could not participate, that the CNE could not be trusted, and that elections were called too early.

Elections were postponed to May 20, and despite the fact that the CNE had recognized opposition victories before the agreement, the agency still allowed them to choose, together with the government, two new council members in accordance with the final agreement they refused to sign.

One disqualified politician is Leopoldo Lopez who can’t run because he was sentenced to almost 14 years in prison for inciting to violence during the deadly 2014 protests.

RELATED:
Who is Leopoldo Lopez?

Another one is Henrique Capriles, who ran for president twice and lost. In 2017 Venezuelan ombudsman Manuel Galindo sanctioned Capriles with 15 years of political disqualification over economic irregularities when he was governor of the state of Merida. The parties that couldn’t participate were not disqualified; they had to go through a process to revalidate their legal status for failing to participate in previous elections, including ANC and local elections.

These restrictions did not amount to an inability to present a unified opposition candidate to reach the opposition’s “electoral solution.”

Henry Ramos Allup, former president of the suspended National Assembly, offered his Democratic Action party to present a “united Venezuela” ticket in late January. Ramos Allup’s party was able to participate because it had successfully completed the revalidation process.

According to sociologist Luis Salamanca the MUD is “virtually liquidated... for not having visualized the political moment and presented a proactive strategy. It is preferable they don’t recognize your victory than losing for not participating.”

The government signed the agreement and is unilaterally complying with its concessions to the opposition.

There will be international observers to monitor the elections, the government requested a U.N. delegation, and several audits have taken place with the participation of opposition parties.

Former MUD member Henri Falcon of the Advanced Progressive is participating and is polling in second with support ranging between 25 and 34 percent with no MUD support.

Falcon’s platform aims at resolving Venezuela’s economic problems by establishing friendly relations with the U.S., which has already said they will not recognize the results.

Thus, the MUD’s boycott negatively affects the only electoral alternative to Maduro by denying him votes and making Falcon’s ability to deliver on his campaign promises seem weak.

For Venezuela’s right-wing opposition there is only one path left, and that is the path of harsher sanctions, including the announced oil embargo.

Journalist Ricardo Vaz argues the “goal is to impose so much suffering on the Venezuelan people that the armed forces, or a sector of them, would be compelled to take power in a coup.”

The idea has already been endorsed by U.S. leaders and Republican politicians, and with no compromise in sight, the Venezuelan government will have to continue resisting waves of political violence from within as well as the economic warfare from abroad.