In 2013, the Turkish government and one of the most important Kurdish movements in the Middle East, the Kurdistan Worker's Party, known as the PKK, announced a bilateral cease-fire and the beginning of “historic” peace talks between the two sides, which aimed to end a bloody conflict that has lasted for almost three decades and claimed the lives of more than 40,000 people, mostly Kurds. 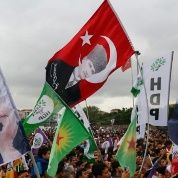 The cease-fire has now ended. Turkey broke it when it launched what is, according to a pro-government journalist, a “comprehensive” operation against the “terrorist” PKK.

The conflict is deeply rooted in the imperialist history of the Middle East, involving the Ottoman Turkish empire, as well as the British and Western powers who were dividing up the region after World War I.

After the collapse of the Ottoman Turkish empire, Turkish nationalists, led by Mustafa Kemal Ataturk, fought off the imperialist powers, which were seekng to divide what is today Turkey into smaller territories. To establish what is now know as the Republic of Turkey, Ataturk, a name that means “the father of Turks” in Turkish, knew he would need everyone's support and promised the Kurds living in what is now the southeast of Turkey that, if they fought alongside his nationalist forces, he would grant them self-rule in their region.

PKK fighters prepare for a fight against Islamic State group. I Photo: Reuters

The war ended and the Turkish state was established in 1934. Millions of Kurds ended up living in a Turkish nationalist state that only approved of Turks and wanted to “Turkify” all within its borders. The nationalist nature of the Turkish republic aimed at ethnically erasing the Kurdish identity and replacing it with a Turkish one.

Since then, the Kurds, who now amount to more than 20 million people – over 25 percent of the population – have had their rights stripped, their language banned from the press, television, and politics. The Kurdish language was only spoken at home. Kurdish children learned only Turkish in schools.

The Kurds are the biggest ethnic group in the world that has no homeland. They are scattered over a region shared by Turkey, Iran, Syria and Iraq.

A Kurdish resistance was born; the most influential being that in Turkey, led by the the Kurdistan Worker's Party.

The PKK was founded by Abdullah Ocalan in 1978 as a Marxist party that reflected Ocalan's ideology and leanings. The party's initial objective, which evolved over time, was to establish a Kurdish state in the southeast of Turkey and eventually join it with the rest of Kurdistan, as similar groups were fighting in neighboring countries.

After a tormented childhood, Ocalan, a bright student from the southeast of Turkey, went to the University of Ankara where he developed a tendency for social justice and was attracted to Marxist ideas that he thought were the way for the liberation of his people.

The group launched its armed struggle against the Turkish state in late 1970s, but was forced out of Turkey due to a military right-wing coup that saw a major crackdown on all leftist groups in Turkey, including Ocalan's PKK.

The PKK's time with the Palestinians, fighting one of the strongest and most advanced armies in the Middle East, gave the Kurdish resistance a boost in armed struggle tactics and street fighting that they would take to the front of their struggle against the atrocities of the Turkish state.

As civil rule was restored in Turkey in 1984, Ocalan and thousands of his fighters settled in Syria and began their armed struggle within Turkish territory.

This “Kurdish Intifada”, as the PKK and some scholars referred to it, seemed to engage frustrated Kurds who, for decades, had been the subject of systemic ethnic discrimination by Turkey. However, using anti-terror laws that were introduced in the new constitution, which was written by the junta regime after the 1980 coup, the Turkish civilian government initiated a major crackdown on the Kurdish population. Thousands of people were killed by Turkish troops, who acted with complete impunity, and thousands more were arrested under suspicion of talking about Kurdish rights. They were all regarded as Kurdish terrorists aligned with the PKK.

The crackdown, however, increased the support for the PKK, which effectively became the only protectors of Kurdish populations. The PKK vowed then that for every Kurdish person killed, the group would hunt down and take action against the Turkish troops responsible. For a while it was an effective policy, which kept the Turkish government in check as it tried to explain to the Turkish population the deaths of the soldiers.

The struggle intensified during the 1990s and the Turkish government sought to kill or capture the powerful Ocalan. In late 1990s, Turkey threatened that it would invade Syria if Damascus did not arrest and hand over Ocalan to Ankara.

Fearing arrest, the Kurdish strongman fled Syria and tried to seek asylum in Europe and Russia before he was captured in Kenya. Turkish intelligence, with the help of the United States’ Central Intelligence Agency and, allegedly, Israel’s Mossad, managed to capture Ocalan, return him to Turkey and eventually sentence him to death in 1999. His sentence was changed to life in prison when Turkey abandoned the death penalty as part of reforms toward European Union membership.

By then, in support for NATO ally the United States, the EU and other Western powers had labeled the PKK a terrorist group and continue to do so to this day. After his capture, Ocalan and the PKK leadership realized that achieving any form of rights for the Kurdish people in Turkey would only be achieved if certain strategic changes were made.

It was at this time the PKK declared it was seeking to stay within Turkey, but with an area of self-rule. They let go of the state objective and sought autonomy instead. Following the landslide win of the Justice and Development party (AK), things started to change.

Kurdish men pose for a picture in front of the portrait of jailed Kurdish militant leader Abdullah Ocalan of the PKK. I Photo: Reuters

The AK party sought closer relations with the European Union, as part of Turkey's ambition to get into the bloc. The European Court for Human Rights had repeatedly denounced Turkish human rights abuses against the Kurds during the 1990s. Thus, as it attempted to please the EU, the AK party introduced minimal changes to the state's stance on the Kurdish question. Language was allowed in politics and Kurds were allowed to participate in politics. However, the conflict and the fighting continued.

In the mid-2000s, a Kurdish political party surfaced and was in direct contact with the PKK and Ocalan. This party is dynamic and pragmatic. It aligned itself with Turkish leftist groups, women rights groups as well as LGBT community and acted as a new face of Turkish democracy and social order. The People’s Democratic Party, or HDP, is now embedded in Parliament, after in June 2015 it passed the 10 percent vote threshold to gain representation in the assembly.

Kurds can now study Kurdish, publish books, newspapers in Kurdish and have political parties and political campaigning in Kurdish, things that were only dream for them just a decade ago.

Yet, while the Turkish state and the PKK have evolved over time and many reforms had elevated the situation of the Kurdish people in Turkey, many argue that successive Turkish government will continue to use the Kurdish question for political gains, and a Kurdish struggle must continue until Turkey recognizes the atrocities of its past and the shortcomings of its present.