The day was Jan. 22, 2009. Forty-eight hours had passed since the 44th President of the United States was sworn in. Barack Hussein Obama II, riding on the coattails of his presidential campaign, hurried to sign an executive order promising to end the U.S. military prison in Guantanamo, Cuba within a year. 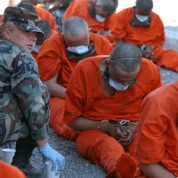 “This is me following through,” Obama declared from the White House.

Eight years and two terms later, that fallacious promise remains a far-flung fantasy: short of Guantanamo being closed, it is due to undergo billions of dollars in renovations, with the 15-year anniversary of its opening taking place on Jan. 11, 2017.

As a Trump presidency nears, the possibility of Guantanamo's closure appears farther. In early 2016, President-elect Donald Trump vowed to load up the prison "with some bad dudes." Just last week, he confirmed that assertion, tweeting, “There should be no further releases from Gitmo. These are extremely dangerous people and should not be allowed back onto the battlefield.”

As the closure of the facility is buried as nothing more than an elusive promise, it is perhaps this issue that is most synonymous with the failure of the Obama administration and its militaristic legacy.

The Pit of Promises

Each policy change regarding Guantanamo issued during Obama’s eight years in office was parceled with yet another vacuous promise to close it.

In March of 2011, when his administration announced new rules regarding Gitmo prisoners, including resuming military trials and establishing a "periodic review" process for long-held detainees, the White House also declared that it "remain(ed) committed to closing the detention facility at Guantanamo Bay."

As a Washington Post story noted, the move all but created “a formal system of indefinite detention for those held at the U.S. military prison at Guantanamo Bay.”

In November 2015, the U.S. Senate overwhelmingly passed the National Defense Authorization Act, which not only authorized more than US$600 billion in defense spending but also contained provisions making it difficult to close Guantanamo. Just a month earlier, in October 2015, Obama had vetoed the bill for the latter reason but did not follow through with that move yet again.

In his final year in office, Obama announced on Feb. 23, 2016, a four-point plan that would “close Guantanamo once and for all.”

But even that plan was gravely finite: it merely involved transferring Guantanamo detainees — most never charged, convicted or tried — to instead a maximum security prison in the United States.

"The centerpiece of the plan — moving those detainees who have not been and will never be charged with any crime to a prison in the U.S. — does not 'close Guantanamo,' it merely relocates it to a new ZIP code," the Center for Constitutional Rights said at the time.

And just five months later, the potentate of empire announced he would not be using his executive power as commander-in-chief to unilaterally shut the detention center — a move he could have made anytime in the past eight years.

"There are many steps in Obama's plan that he has ample authority to carry out," Omar Shakir, a fellow at the Center for Constitutional Rights told teleSUR in 2016.

Gregory B. Craig, a lawyer who served as White House counsel to Obama in 2009, and who was the special envoy for Guantanamo’s closure in 2013 and 2014, also wrote in 2015, “Some maintain that the congressional ban on transfers from Guantanamo to the United States prevents closure without congressional approval. But that is wrong. Under Article II of the Constitution, the president has exclusive authority to determine the facilities in which military detainees are held.”

The only cause for celebration in Obama’s war-stained legacy is that even in the waning days of his presidency, detainees are being transferred out — as the number of detainees at the prison has dropped from a high of 680 in 2003 to 59 in 2016 – 22 of whom have now been cleared for release.

Time can only tell what the fate of Guantanamo prisoners will be under Trump, having endured the brutality of both the Bush and Obama eras.