From musicians to independence heroes to important grandmothers, here are eight badass Venezuelan women you should know about. 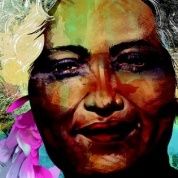 Venezuela is a country that has undergone an intense period of revolutionary change over the past 17 years and women have played a vital part not only during the revolution, but in getting the country to a point where meaningful change could take hold.

Grandmother Rosa: Venezuela's current revolution may not have happened without Rosa Ines Chavez, the paternal grandmother of late President Hugo Chavez, who credited her with imbuing him with revolutionary ideals at the table of her modest house in Sabaneta de Barinas.

Algeria Laya Mercedes Lopez: Considered one of the trailblazers of the feminist movement in Venezuela, Mercedes was a tireless political and social activist and women's rights advocate. Born in 1926, Mercedes met with some of the most famous revolutionaries of her time, including Mao Zedong, Ho Chi Minh and Fidel Castro.

Teresa de La Parra: Parra is recognized as an outstanding contributor to Venezuelan literature. Born in Paris in 1889, she came to Venezuela aged 2 with her Venezuelan parents. Parra is best known for her two novels, "Ifigenia," and "Memorias de Mama Blanca," which were both made into films and soap operas.

Teresa Carreño: One of Venezuela’s greatest musicians and composers, Carreño shocked the world and 19th century Caracas society with her skill and talent on the piano when, aged just 9, she gave her first concert, at Irving Hall in New York in 1862, where she was hailed "a dark-eyed beautiful darling South American child" by Frank Leslie’s Illustrated Newspaper. Among her most famous compositions are "Hymn to Bolivar," "Salute to Caracas," and the waltz "To Little Teresa."

Luisa Caceres de Arismendi: Luisa Caceres Diaz was born in 1799, during the last years of Spanish rule in South America. Caceres married military republican Juan Bautista Arismendi in 1814, who offered protection to her family after they participated in a crucial independence battle against Spanish loyalists.

Josefa Camejo: Considered a national hero, Josefa Camejo was born in 1791. At age 19, Camejo joined the fight for independence from Spain after witnessing the April 19, 1810 revolution.

Concepcion Mariño: This Venezuelan heroine was another independence fighter who joined the struggle against Spanish rule in 1812, aged 22.

Juana Ramirez: Known as "The Trailblazer," Ramirez fought for independence alongside some of the greatest revolutionary names of her time. She got her nickname after she emerged first out of a pit amid a torrent of bullets during the 3rd battle of Maturin, May 25, 1813.