It’s been six decades since the dictatorship of Batista was overthrown by a group of young revolutionaries who wanted to change the capitalist hegemony of West and establish a state inspired by Latin American Independence figures such as Jose Marti and Simon Bolivar, as well as the philosophies of Karl Marx and Vladimir Lenin. 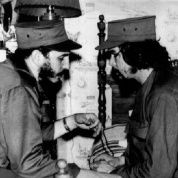 On this day, 60 years ago, in 1959, a rebel force led by revolutionary leader Fidel Castro seized the capital Havana, forcing Batista to flee. Hence started a long and tumultuous journey of rebuilding a nation based on the principles of socialism.

Cuban Revolution has been widely reported, documented as well as highly romanticized by many. It also gave hope for a new dawn for the people of global south who were fighting imperialism in their respective countries.

The revolution started when in 1956, the Granma boat carried a handful of young rebels in Cuba but a storm was brewing long before the hurricane hit the tiny island country.

On Jan.1, 1899, Cuba came under the control of the United States after a war with Spain which took place due to Cuban independence struggle against Spanish colonialism. Until 1902, a direct U.S. military administration was governing Cuba.

From 1902 to 1925, three presidents governed Cuba, all backed by the U.S. and riddled with corruption. In 1925, Cuba saw its first dictatorship when Gerardo Machado y Morales came to power. Rule of terror began when he assumed office for a second term in 1928 which ended when the army forced him to flee in 1933.

Fulgencio Batista y Zaldivar, a sergeant who gained control of the army during Machado’s ruling, became the kingmaker for the next few years. He made and unmade presidents and most of his choices were backed by the U.S.

In 1940, Batista, then a colonel, chose to run for office and won. In 1944, Batista’s chosen candidate lost the presidency.

However, Batista chose to run again in the 1952 elections. But he anticipated his defeat and overthrew the government, closed the Congress, and called for elections in 1954. He was reelected in 1955.

Many Cubans questioned the validity of the 1955 elections and campaigned against the same. One of the many protesters was Fidel Castro.

In 1952, Fidel, a recent law graduate was a candidate for the Cuban People’s Party but Batista’s coup stopped the elections. Realizing the importance of a militant movement, Fidel stepped away from parliamentary politics and focused on direct attack.

On July 26, 1953, Fidel, along with his brother Raul Castro, led 160 men to raid the "Cuartel Moncada", army barracks in the city of Santiago, which ended in bloodshed and the imprisonment of the Castro brothers. When they were freed in 1955, the brothers left the country for Mexico where they plotted the revolution that would change the country’s political landscape forever.

Fidel Castro’s 'History Will Absolve Me' in 10 Stirring Quotes

A group of 81 revolutionaries set sail to Cuba in 1956 from Mexico in the famed Ganma which crashed near Los Cayuelos, an eastern city. The crash already killed some men and then Batista’ army attacked the rest. Left with 19 men, the Castro brothers, Camilo Cienfuegos, and Che fled deep into Sierra Maestra mountains which till date remains well-hidden.

Known as Comandancia La Plata, the remote hideout became the base from where the revolutionaries started guerilla warfare leading to Batista’s overthrow in 1959.

The Cuban people were not over celebrating this historic win when the United States started intervening in the country. The Cuban administration under Fidel Castro faced a number of U.S.-backed attempts of coups. There were numerous assassination attempts on Fidel himself.

During that time, the world was witnessing the Cold War between the capitalist U.S. and communist Soviet Russia. An ideological war was taking place. Having a socialist country right in its doorstep, shook the U.S. They wanted to get rid of communist leaders like Castro brothers and Che.

But the leaders and the country, both survived. Not only that, Cuba thrived that too while dealing with the U.S. embargo.

Revolutionary Cuba saw a series of reforms which aimed at upgrading the society. The health care and education sector was improved immensely with Cuban doctors traveling the world, working with marginalized sections, proving free health care for all.

The country also became illiteracy free in 1961 within a year of starting a literacy mission dropping from 23.6 percent to a mere 3.6 percent. Presently, the rate of illiteracy is 0.2 percent, one of the highest in the world.

“The equal right of all citizens to health, education, work, food, security, culture, science, and wellbeing - that is, the same rights we proclaimed when we began our struggle, in addition to those which emerge from our dreams of justice and equality for all inhabitants of our world - is what I wish for all,” is one of Fidel’s famous sayings.

Continuing the philosophy of revolution and Fidel’s imagination of an equal and just society, Cuba brought forth a new draft constitution under the leadership of current President Miguel Diaz-Canel in 2018.

The Draft Constitution represents a reform of the 1976 constitution. The new constitution, while maintaining the socialist nature of the state and the leading role of the nation’s Communist party, will bring in reforms on homosexual marriages, recognition of private property, the sustainable use of natural resources, the inclusion of the right to an abortion, and access to basic services.

The draft of Cuba’s new constitution was written after holding 133,681 debates, organized between Aug. 13 and Nov. 15, at the local level that resulted in several citizen proposals. Almost 9 million Cubans participated in these preliminary debates.

The final draft will be voted on and ratified through a referendum scheduled for February 2019.  Communism is “a legitimate aspiration for all” according to Cuban lawmakers and they committed to society’s advance towards Communism and continue the revolution with this new constitution.

“I began revolution with 82 men. If I had to do it again, I do it with 10 or 15 and absolute faith. It does not matter how small you are if you have faith and plan of action.”- Fidel Castro