The COP21 deal has been celebrated as a binding agreement, but what exactly countries are bound to is a telling sign of how far short the deal falls. 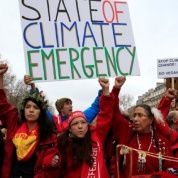 Global leaders celebrated the outcome of the COP21 Paris climate talks in December last year as “historic” and a “monumental triumph” for the climate.

But as environmental organizations and activists continue to slam the agreement for doing too little too late and dooming the world to climate chaos, here are five things you should know about the COP21 climate deal ahead of its signing in New York on Friday.

1. It puts the world on track for 3 degrees Celsius global warming

The COP21 text states that the purpose of the climate deal is to keep global warming “well below” 2 degrees Celsius while aiming for 1.5 degrees Celsius above pre-industrial levels, but the agreement lacks the mechanisms to make this goal a reality.

Instead, the deal puts the world on track to far overshoot these targets and hit 3 degrees Celsius warming. Global emissions reductions are achieved through voluntary, intended national pledges. These pledges mean the biggest climate culprits that carry the historical burden of climate change can voluntarily contribute emissions reductions that they think they can achieve, not what is globally necessary.

Scientists say that 2 degrees Celsius warming is the maximum limit the world can hit before facing catastrophic and irreparable planetary damage that could bring an end to human life as we know it. Many Latin American countries and front-line affected communities, already feeling the impacts of climate change, have pushed for the more ambitious 1.5 degrees Celsius limit, which climate scientists agree is the appropriate target to protect the most vulnerable.

But so far, global leaders have not risen to the high-stakes challenge.

2. It has no legal commitment to climate reparations

The deal refers to “loss and damage” related to climate change and its impacts, but explicitly states that the relevant article in the core text of the deal is not a basis for liability and compensation. This means that climate reparations which would see wealthy countries largely responsible for fueling climate change pay their carbon debts to poorer countries are still far from a reality.

OPINION: World Leaders Signed a 'Death Warrant for the Planet' at COP21

According to a report from Democracy Now!, President Barack Obama only agreed to include loss and damage in the COP21 deal if the clause could not be used a legal basis for paying climate compensation. The issue was a key area of dispute throughout the negotiations.

At COP21, U.S. Allows Mention of Climate Reparations — Only If It Doesn’t Have to Pay Them https://t.co/zLRdSOGDzn pic.twitter.com/kW7WAIjd19

Climate reparations were never on the agenda at COP21, despite being put forward by Global South countries such as Ecuador and Bolivia as a strategy to help the most vulnerable in the face of climate change, while holding rich and polluting countries accountable.

But the loss and damage component is a big disappointment for climate justice campaigners, and likely to doom developing countries to climate-induced suffering due to the lack of legally-binding compensation for big polluters’ damage to the climate.

3. The legally binding commitments are weak, while key items are not binding at all

While the COP21 deal has been widely celebrated as a binding agreement, what exactly countries are bound to is a telling sign of how far short the deal falls.

There is no legally binding agreement on climate finance, a critical but highly disputed part of the agreement. While the deal urges rich countries to take the lead on helping to provide developing countries with financing and technologies to help adapt and mitigate climate change, all financing is voluntary.

RELATED: 5 Things You Need to Know About COP21

Voluntary financing is a huge let down for climate activists, who have been calling for wealthy countries to help finance the global transition to clean energy.

The utter lack of mention of fossil fuels in the text of the deal also points to the failure of the deal to grapple with urgent climate change priorities. It calls for globally emissions to peak “as soon as possible,” but does not mandate a specific timeline for emissions reductions, leaving countries ​free to keep polluting.

Something everyone should know about #COP21 climate deal: the words "fossil fuels" do not appear. Neither do the words "oil" or "coal."

The deal also does not come close to laying out a plan for phasing out fossil fuels. As a result, the agreement is even weaker than the preliminary draft deal set out by G-7 nations earlier at the U.N. Climate Change Conference this year, slammed by climate advocates for dooming the world to “climate chaos” by proposing to phase out fossil fuels by the end of the century.

What’s more, though 195 countries have signed onto the climate deal, which will only come into effect after being ratified by at least 55 nations, any country can withdraw from the deal after three years.

So while global leaders pat themselves on the back for overcoming the failure of COP15 in Copenhagen in 2009 by reaching a so-called legally binding agreement, the deal has still failed to force world leaders to commit to changes on core issues to tackle climate change in an urgent, effective, and holistic way.

4. There are no measures to hold corporations accountable

The deal focuses on the responsibilities of countries to lower carbon emissions by their own voluntary pledges, and as a result leaves corporations off the hook from legally binding climate action.

#COP21 195 countries signed a pact - not ONE global corporation

While the agreement “welcomes” and “invites” stakeholders other than countries, including private corporations, to participate in efforts to tackle climate change, it does not mandate corporations to change their practices in response to an increasingly warming world. This leaves the door open for fossil fuel companies to continue to pollute.

What’s more, many of the same global leaders who made high-profile speeches about the urgency of climate change at COP21 are at the same time cozying up to big corporate polluters with the controversial Trans-Pacific Partnership, currently pending approval. The draft text of the TPP reveals enhanced power for corporations, including fossil fuel giants, such as rules to allow corporations to challenge national and international laws in secret trade courts.

This means the TPP could undermine any action that does result from the COP21 agreement by setting new limits on governments’ abilities to introduce strong policy to tackle climate change, such as renewable energy programs.

At the core, the COP21 agreement fails to recognize the underlying roots of climate change and the systemic and economic reasons for global carbon inequality and increasingly boiling global temperatures.

5. It has no mention of human rights in the core body of the text

While the draft text included a provisional mention of human rights in the section highlighting the purpose of the deal, world leaders ultimately opted for the weaker option of removing human rights from the purpose, leaving it only in the non-binding preamble.

OPINION: Climate Action: Why Justice in Paris is Unlikely

The deal also pays no substantial attention to the rights of Indigenous peoples, among the hardest hit by climate change, and recognition of the role Indigenous communities play as stewards of the environment. There is also no mention of intergenerational equity or biodiversity in the core of the text, sidelining any commitment to protecting future generations and integrated ecosystems from the devastation of climate change.

As a result, the deal fails to take into account systemic causes and the key issues of human and environmental rights in the context of climate change and falls far short of a just climate deal.