Brazil, Latin America’s largest economy and most populous nation, could be on the verge of major political change that could have ramifications not just across the region but globally. 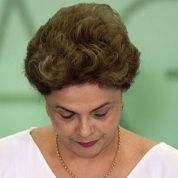 The full senate is scheduled to vote on May 11, a day that could see the Brazilian president temporarily suspended from her post in what would likely lead to the first impeachment of a Brazilian president since 1992 when Fernando Collor de Mello faced massive protests over corruption charges and resigned moments before his conviction by the Senate.

1. A President of Millions

Rousseff is Brazil’s first woman president. She took office Jan. 1, 2011, after scoring a resounding victory in the presidential election held in October 2010 under promises she will improve the education system and cut inequality.

RELATED:
3/4 Brazilians Want the Man Impeaching Rousseff to Get the Boot

After a successful first term she was reelected in 2014, seeing off right-wing apparently corrupt politician Aecio Neves from the Brazilian Social Democracy Party or PSDB. She ammassed over 52 percent, 52 million votes, of the ballots.

The Workers Party, PT, has been in power for over a decade, much to the chagrin of the country’s conservative political forces.

The now suspended speaker of the lower chamber of Congress, Eduardo Cunha, a political opponent of Rousseff, accepted a petition for impeachment in what was described by the president’s supporters as vengence. Cunha, who is under investigation for undeclared Swiss bank accounts totalling US$5 million, only began impeachment proceedings when lawmakers from the PT voted to open an investigation.

A vote in the full lower house, which comprises of 513 lawmakers many of whom are also accused of different crimes, has already taken place and the impeachment proceedings are now in the Senate, which will vote likely vote this Wednesday to continue on with the process.

In this scenario, Vice President Michel Temer — also from the same party as Cuhna and who is also accused of corruption is the man who helped push the call for impeachment — will take office as acting president if the Senate votes in favor of the procdure.

The Senate will hold a simple-majority vote on whether or not to convene a trial. If no decision is reached within 180 days, the suspension of the president ends.

Like the lower house, is controlled by Rousseff’s adversaries, which means they will likely approve her impeachment trial.

The Senate committee voted Friday in favor of continuing the impeachment process of the president. Amazingly, over half of those who voted for impeachment face charges of corruption and other serious crimes. Similarly, 15 out of the 65 members of the impeachment commission have themselves been accused of corruption.

In other words, people accused of corruption voted to open an investigation into a president who has not been found guilty of any wrongdoing.
This is why Rousseff’s supporters say that impeachment without proof of a crime is a coup.

Brazilian law stipulates that if a trial is convened in the Senate, the president must automatically step down. That means Temer could very soon be the president of Brazil, even if only on a temporary basis.

His party, the PMDB, has already revealed what they intend to do with power.

In a report revealed by "O estado de Sao Paulo," the PMDB indicated that they would implement sweeping austerity reforms, including cuts to the lauded “Bolsa Familia” program.

The report also said the PMDB would consider cutting a large housing program for the poor and displaced workers and a program to make college education more accessible.

Pressure began mounting on Rousseff in 2015 after Brazil’s once impressive economy shrank by 3.8 percent, the biggest decline since 1981 and a multibillion-dollar corruption scandal was exposed in the country’s state-run oil company Petrobras.

In the past two years, over 100 people have been arrested for their alleged involvement, including senators and top executives at Petrobras and members from both sides of the political spectrum. Dilma though has not been formally investigated.

Yet the investigation into the corruption scandal has taken a political course, with the lead investigator, Sergio Moro, coming under heavy criticism for his alleged anti-PT bias. Most of the politicians under investigation are not members of the PT, yet the cases involving the PT receive the most attention from the press and investigators.

Rousseff’s potential impeachment is totally unrelated to her or PT’s dealings with the state-run oil company. Rather Rousseff is accused by her political opponents of breaking fiscal laws. They allege she manipulated government accounts to make the country’s deficit seems smaller than it was ahead of the 2014 presidential election to garner support for her re-election campaign.

The government maintains that the audit court is criticizing steps taken by the government to maintain social programs for Brazil's poor, such as the widely-praised Bolsa Familia.