Ilhan Omar, one of the few progressive lawmakers in the United States Congress came under attack Sunday for criticizing Israel’s overt influence on the U.S. politics. 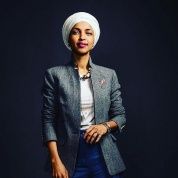 Omar suggested that members of U.S. Congress support Israel because of money they receive from the pro-Israel lobbying groups, sparking a Twitter storm. She tweeted that support for Israel was “all about the Benjamins” i.e., Benjamin Franklin whose image appears on US$100 bill. Pro-Israel voices in the United States political and media spheres quickly criticized her while many progressive voices defended her.

In response to Ilhan, Forward journalist Batya Ungar-Sargon wrote, “Would love to know who @IlhanMN thinks is paying American politicians to be pro-Israel,” to which Ilhan responded, “AIPAC.”

What ensued next was a smear campaign against Omar who dared to speak out on an issue many veteran politicians whether from Democratic party of Republican never brought up.

The smear campaign exposed an Israeli-driven narrative that rejects any difference between anti-Semitism and legitimate criticism of Israel which resulted in mounting pressure against Omar that not only was she made to apologize, but also U.S. President Donald Trump called on her to resign from the Congress. Many found that ironic given the fact that many have been calling on Trump to resign for years over more serious racist and xenophobic comments.

Israel does not represent all Jews. It’s pathetic that an opinion editor for a major Jewish newspaper either A) doesn’t understand that’s an anti-semitic trope, or B) is advancing the trope to smear a critic of Israel’s over-sized influence in US politics. https://t.co/DaZMSCBIXT

However, other progressive voices are denouncing the shaming of Omar and in fact praising her for bringing up such a thorny issue in U.S. politics, many in politics prefer to steer clear of.

teleSUR takes a look at the five reasons the backlash against Ilhan Omar's comment conflates anti-Israel stances with attacks on all the Jewish people.

AIPAC has been funding the U.S. politics by indirectly donating for pro-Israel politicians’ campaigns.

“AIPAC is not a political action committee and does not provide donations directly to candidates. However, it does act as a 'force multiplier,' to quote the Jewish Telegraph Agency’s Andrew Silow-Carroll, and 'its rhetorical support for a candidate is a signal to Jewish PACs and individual donors across the country to back his or her campaign,” wrote Mehdi Hassan in a recent article for The Intercept.

According to Open Secrets.org, a group which tracks election spending by different organizations, AIPAC spent US$3.5 million for the 2018 U.S. midterm elections.

“However earnest these groups may be about their support for Israel, they are explicitly in the business of trading influence for money,” wrote Journalist Noah Kulwin adding that this influence is not confined to AIPAC only. Kulwin gave an example of casino magnate and right-wing Israel supporter Sheldon Adelson and his wife Miriam spent US$55 million just for midterms in 2018 to maintain the pro-Israeli Republican control of Congress.

2) It is okay to criticize NRA but not AIPAC. Hypocrisy much?

It is ironic how the National Rifle Association’s contribution to the current president’s campaign has been a matter of huge criticism but AIPAC’s involvement in kingmaking is an untouchable topic. This clearly points towards the mammoth influence of the pro-Israel lobby.

According to Mehdi Hassan many leading Democrats denounce and decry the impact of special interest lobbies and donations regarding those issues like Big Pharma, Wall Street, Saudi Arabia, and other issues.

In recent months the influence of Saudi Arabia in U.S. politics has been denounced after the murder of journalist Jamal Khashoggi, while others point to the “grip” that the NRA has on the debate over gun control, to quote Democratic Senator Richard Blumenthal, following mass shootings. But any mention of AIPAC and lobbying in favor of Israel? “Anti-Semitism!”

3) Criticizing Israel does not mean anti-Semitism:

Anti-Semitism means hostility and prejudice against Jews.  And what Ilhan Omar wrote did not attack Jews.

The evangelicals are often Zionist supporters who demand the establishment of a Jewish homeland in the territory defined as the historic Land of Israel i.e. the land of Palestinians.

Many Jews are neither Zionists, nor supporters of Israel’s influence on U.S. politics and policies, which, for example, made Trump move the country’s embassy from Tel Aviv to Jerusalem.

As a Jew, I want to welcome anyone who wants to criticize a lobbying coalition funded by arms manufacturers, evangelical Christians, and allies of the right wing edge of Israeli politics. Criticizing AIPAC is not anti-Semitic and it’s absurd that this even needs to be said.

It’s anti-Semitic to associate Jewishness with the politics of the state of Israel, that is, Israel as representative of Jewish consciousness. AIPAC is committed to promoting this narrative. The state of Israel claims to represent all Jewish people. Anti-Zionism, which Ilhan Omar is, by the virtue of her support for Boycott, Divestment, and Sanctions (BDS) movement, is not anti-semitism.

4) The U.S. does not care about Palestinians:

The whole debate points out to the macabre fact that the U.S. does not care about the lives of Palestinians or Israel’s brutal occupation of Palestine.

Only two congresswomen, namely, Rashida Tlaib and Ilhan Omar are raising their voice for the rights of Palestinians.

The fact that Glen Greenwald’s original tweet was about Omar and Tlaib facing backlash for their support for Palestinian lives was ignored as context behind Omar's original tweet against AIPAC is a proof of the grim fact mentioned above.

“And the last point I would add is, my point was, in saying how weird it is, what a priority it is for U.S. politicians to defend Israel, was based on the fact that the very first bill passed by the U.S. Senate was not about helping Americans; it was about empowering states to punish people who support a boycott of Israel, a bill sponsored by Marco Rubio, who got more money from Sheldon Adelson than any other politician in 2016, and then was supported by half of the Democratic Senate Caucus,” said journalist Glen Greenwald in a recent interview.

“That’s what I was referring to. And the congresswoman was saying a big reason for that is the monied interests in Washington that demand that. And of course everyone knows that’s true, and to call that anti-Semitic is just obscene.”

5) Omar shook the foundation of the Zionist U.S.:

By taking up an issue that has been swept under the rugs by all stakeholders of U.S. politics, Omar helped spark a discourse in the mainstream political circle. The support for Ilhan from various sections of life is both a shame and matter of urgency for the Democratic party to take action on connecting with its base instead of acting on the behest of its elite donors.

Even though the current debates are all about Israeli’s rights, at least in the mainstream political and media circles, the discourse it started in civil society, is significantly important.