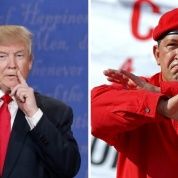 Few of these comparisons could be more inaccurate and foolish as the various articles, and now Clinton campaign video, comparing the sexist, race-baiting Trump to late Venezuelan President Hugo Chavez.

It’s true that both men speak loudly, at times with colloquial or even colorful language, but their views, backgrounds and actions could not be further apart.

Below are just five of the many reasons why any attempt to compare Trump with Chavez should laughed out of whatever space it’s presented in.

Throughout the election campaign, anyone who for some reason was unaware as to the source of Donald Trump’s wealth, has learned that he began his real estate empire with a "small loan" of US$1 million from his father, and later inherited an additional US$39 million.

IN DEPTH:
US Decides

Chavez on the other hand, grew up in a poor family of mixed African and Indigenous heritage on Venezuela’s plains. He entered the military, where he became involved politically and rose through its ranks to later lead a political movement called the Fifth Republic. Chavez was elected president of Venezuela on four occasions, each by large margins.

The background of Trump and Chavez respectively, weighed heavy on their political outlook, with Chavez championing the plight of the poor and marginalized while the Donald continues to trumpet the private sector as the cure for all ills.

2. Donald Thinks Markets Work for the Poor vs. Chavez Using the State to Empower the People

Perhaps Donald Trump should be given some credit for raising the plight the U.S. working class—decline in jobs, wages, crumbling communities and schools, lack of opportunities. But while he often attempts to convince the electorate that he is a great guy who loves “Blacks,” “Hispanics,” or whomever he is trying awkwardly to woo, he is definitely more in love with free market economics.

Sure, he may slam the results of NAFTA and warn about the dangers of the TPP, but really, he is simply stating that he would negotiate the terms of such deals to be more favorable to the United States and its struggling proletariat.

Moreover, Trump has persistently argued for less state involvement in basically anything that isn’t the police, military or border patrol, a la Robert Nozick. Make no mistake about it—the capitalist is arguing for market solutions to the problems generated by capitalism.

Many of Chavez’s predecessors, following the trend in the region and the "advice" from Washington, also sought to create more space and less regulations in the private sector with the promise of jobs and opportunity. Not surprisingly, these policies generated more poverty.

Chavez inherited a Venezuela in decline, with rampant inequality and the issues that come with. The response from his government was to empower the poor, through the creation of a wide array of social programs to support people’s needs as well as mechanisms to give them greater say in what was done in their communities and country. Chavez used the state to direct resources to the people, through these programs as well and the local councils.

As a result, poverty levels plummeted, access to education and health skyrocketed and Venezuelans remain among the most politically active population in the region.

The country is currently experiencing economic difficulties, predominantly due to their decades-long dependency on oil as the only engine of the economy, but this does not erase the tremendous social gains made by rejecting a neoliberal approach to meeting people’s needs.

3. Chavez's Politics of Inclusion vs. Trump's Racism, Sexism and Scapegoating

Chavez initially ran on a moderate platform of increasing distribution of Venezuela’s considerable oil wealth to the country’s poor, estimated at some 55 percent of the Venezuelan population at the time of his election. Throughout his tenure, the Bolivarian Revolution indeed promoted class consciousness, but within a national inclusionary project.

OPINION:
The Globalization of Donald Trump

Chavez pushed for women’s right, African and Indigenous rights and heritage, and even LGBT rights in a country that generally swings conservative on these questions. Chavez’s socialist outlook began to be heavily influenced by an environmentalist lens, in spite of Venezuela’s dependence on oil.

The plethora of denigrating statements by Trump regarding women, Muslims, Latin Americans, Black activists etc etc should be sufficient to illustrate the monumental gap between climate change denying Trump’s worldview and that of el comandante. But just as concerning are the friends and supporters he is attracting, including endorsements from neo-nazi organizations, anti-immigrant militants like Joe Arpaio and islamophobic groups.

A seldom known fact is that Venezuela has taken in the highest number of refugees in the region. The majority of these are from neighboring Colombia, where the country’s 50-year civil war has pushed out millions of Colombians.

A staggering 5 million Colombians live in Venezuela, including some 176,000 with official refugee status. Under Chavez, the government began means of nationalizing Colombians, and even those who are not citizens were eligible for social programs begun under the Bolivarian revolution.

More recently, the country offered to take in 20,000 Syrian refugees.

Trump’s policies and supporters see migrants and refugees as an imminent threat and have pushed for radical measures including the wholesale deportation of some 11 million people without status, the building of a wall with Mexico, surveillance and branding of Muslim communities etc.

Some consider Trump to be "less" of a hawk than Hillary Clinton, given her track record at the State Department where she oversaw the destruction of Libya, the onset of the conflict in Syria, and the legitimization of the coup that turned Honduras into the murder capital of the world.

While Trump has a softer take of Russia than Clinton, he is by no means a dove. He has consistently reaffirmed his intention to massively increase U.S. military spending and has argued that the U.S. should sell its imperialistic, military services, rather than reduce or god forbid end them. His appeals to use U.S. military might as a negotiation card when dealing with countries that could resist his plans—say, with Mexico not wanting to pay for his wall—should be telling.

Chavez on the other hand, may have been a military man, but he actively promoted peace in the region and abroad. His role in initiating the historic peace negotiations between Colombia and the country’s guerrilla movements has been widely acknowledged by both parties, and the late leader often intervened personally to pressure for the release of people taken into custody by the FARC.

Venezuela’s president was also a lonely voice opposing the onset of the so-called war on terror and its first mission in Afghanistan, as well as the follow-up invasion and occupation of Iraq. In addition, Chavez forged strong ties with Palestinians, going as far as to break diplomatic relations with Israel following the 2009 conflict which left 1,200 Palestinians dead and over 5,000 wounded