The 45th anniversary of the National Chicano Moratorium march, which saw tens of thousands Mexican-Americans protest against the Vietnam War, was an opportunity for Latino organizers on Saturday to reflect on their legacy and the challenges ahead. 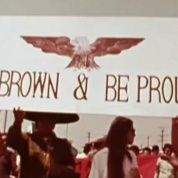 “Our struggle is not in Vietnam but in the movement for social justice at home,” was the slogan chanted among the multitude of 25,000 people marching in East Los Angeles against the Vietnam War on Aug. 29, 1970.

The march came out years of organizing by Mexican-Americans, or Chicanos and Chicanas, who decried how members of their community were in disproportionately large numbers recruited to kill or get killed in Vietnam.

Unlike their white counterparts, who could be exempted from the military by going to college, many Mexican-Americans plagued by poverty and racism could not afford this option.

Today is the 45th Anniversary of #ChicanoMoratorium. 30,000 marched to protest opposition of Vietnamese War. pic.twitter.com/q2DIhZUUV1

Seeking to bring an end to what they felt was an unjust exploitation of their community, Chicanos and Chicanas organized between 1969 and 1971 to make the U.S. government accountable.

This culminated on Aug. 29, which was “the most significant civil rights and community empowerment movement by Mexican Americans in the country of that time,” according to Mario T. García, a Professor of History and Chicano Studies at the University of California Santa Barbara.

While peaceful, the protests turned into riots when squads of county sheriffs, backed up by Los Angeles police, dispersed the rally with billy clubs and tear-gas.

Three people were killed with many arrested and injured. Ruben Salazar, an influential journalist and outspoken advocate for Chicano rights, was among those killed.

According to Garcia, the events “showed the courage and commitment of young Chicanos — the Chicano Generation — to take on the system and to demand that a ‘war of choice’ be ended, a war that was particularly injurious to Chicanos and other minorities.”

Writing for the National Catholic Reporter, he says it was “a display of Chicano Power — self-determination — that has now evolved into Latino Power, as Latinos have become the largest minority in the country.”

Not everyone shares the optimism of the historian academic, however.

For John Paul Brammer, a U.S.-Latino journalist, the Chicano movement has been largely co-opted and turned into a “Latino power” that is “predicated on their ability to register and vote in elections.”

“A greater vision for Latino empowerment is necessary for our people to overcome the obstacles we face, a vision that goes beyond electing the most Latino-friendly politicians the current political climate has to offer and beyond the issue of immigration,” Brammer wrote for the Blue Nation Review.

A similar sentiment is shared by Herman Baca, the President of Committee on Chicano Rights, who believes conditions for Mexican-Americans, and Latinos generally, have gotten worse since 1970.

“Our people remain afflicted with the effects of white supremacy. We have more of our youth in prisons than colleges. The age-old issues such as police brutality, high unemployment rates, youth, seniors, housing, and health care problems remain,” Baca wrote for The OB Rag blog.

In the face of these dire challenges, commemorating the National Chicano Moratorium march for Brammer could remind Latino communities and their organizers that “our strength as a growing community does not begin and end with whom we vote for in 2016. Our movement can and should include social justice.”