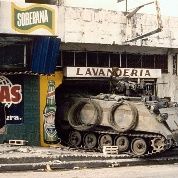 Under the name “Just Cause,” the operation left thousands of victims in its wake, with many unidentified bodies burnt and piled up in the streets, according to many witnesses.

The military invasion, launched by then President George H.W. Bush, came 10 years after the small country had finally gained its independence over its canal. Ten days after the invasion, the canal, which belonged to the United States until 1979, was finally due to return to partial Panamanian control in 1990, and fully in 2000. In order to try to maintain a government that supported U.S interests, and to maintain U.S. hegemony in the region, Washington had previously tried economic sanctions, and even a failed miltiary coup attempt, before resorting to a full-scale invasion.

As the Cold War had just come to an end with the fall of Berlin Wall, the United States could hardly use communism as a pretense to invade other countries as it had many times before, like it did with Vietnam. Nevertheless, the fear that their authority over the canal could be transferred to a government that didn’t completely submit to U.S. interests prompted the United States to claim it would be “saving” the Panamanians from a suddenly “cruel dictator,” who was also a drug-trafficker – an activity that they were aware of but did not seem to mind while President Manuel Noriega was collaborating with the CIA, in Washington’s fight against the Nicaraguan Sandinistas for instance.

Until 1988, Washington even praised Noriega's efforts against drug trafficking in the region on several occasions, even though the CIA kept a record of his involvement in criminal activities since 1972, as Noam Chomsky pointed out in his 1993 book, “What Uncle Sam really Wants.”

The international corporate media backed Washington’s accusations, forgetting, for instance, the prohibition of unilateral military intervention enshrined in the U.N. Charter — which the United States is a signatory of.

Once the propaganda was in place, the U.S. administration just waited for an incident that could provide a pretext for the intervention. This happened in short times as the U.S. troops in Panama were constantly provoking the Panamanian population, as well as the country’s army, nicknamed the “Hard Chargers.” Consequently, one day a U.S. soldier died during a confrontation with Panamanian troops and triggered the invasion.

The military invasion did not merely consist of defeating the few thousand Panamanian soldiers. The U.S. troops set buildings on fire, forcing people to leap from the windows, crushed people with tanks, and also executed people in the streets. Thousands of civilians lost their lives that day, including foreign journalists. This has led some to believe that the United States may not have only invaded the Central American country to recover control over the canal, but rather to test its massively destructive weapons, as suggested by Mauro Zuñiga, a doctor and writer persecuted by the Panamanian army at the time.

The exact amount of victims remains unknown. A Central American Human Rights Commission report has since questioned the official 2,000-3,000 estimate. The report denounced the “disproportionate use of military force,” contradicting “the international legal norms of warfare,” including attacking very populated and poor neighborhoods in the capital.

The U.N. Security Council, the U.N. General Assembly, and even the U.S.-controlled Organization of American States passed resolutions condemning the U.S. invasion – although the United States, along with its allies France and United Kingdom, vetoed the resolution at the Security Council.

As for Panama, the arrest of the so-called drug-trafficking president, led to more drug-trafficking. Alexander Cockburn and Jeffrey St. Clair in their co-authored book “Whiteout: The CIA, Drugs and the Press,” noted, "The greatest irony of all is that, under the US-installed successor to Noriega, Guillermo Endara, Panama became the province of the Cali cartel, which rushed in after the Medellin cartel was evicted along with Noriega. By the early 1990s, Panama's role in the Latin American drug trade and its transmission routes to the U.S. had become more crucial than ever."